Corpus Christi is a Catholic parish that celebrates only the Latin Mass. The Latin language has been used by the Church since the first centuries of the Church. It is still the official language of the Church.

The Mass as said here is not the “indult” Mass. The Church has solemnly state since the 16th century that Catholic clergy do not need permission to say this Mass. Most Catholics have been told otherwise.

As you will notice, the priest says Mass with his back to the people. This is an ancient tradition which has been maintained because in this position the priest is a mediator between the laity and God. It is, therefore, the only proper position for the priest.

Corpus Christi does not have Eucharistic ministers. This is an abuse started after Vatican II. The Church previously did not allow such innovations, setting aside the celebration of Mass and all that it entails only to the priesthood. The clergy are quite capable of fulfilling their duties in the sanctuary without the assistance of the laity. The alter servers are either young boys or men. Historically, they represent the clergy, which is why female servers are not allowed at this parish. Corpus Christi rejects the Permanent Diaconate and a married priesthood. It also rejects the use of the laity for reading the Epistle and Gospel and for giving sermons.

The Sacrament of Holy Eucharist is distributed only on the tongue and in the kneeling position. Standing for Holy Communion and taking It in the hand are serious abuses allowed only since Vatican II.

You are welcome to speak to the liasons who will be happy to answer any questions you may have. They would also be happy to introduce you to the pastor of the parish, Fr. Joseph, OFM.

Corpus Christ Catholic Church was founded as Corpus Christi Mission through the effort of Dr. John and Mrs. Cathy Mottet in September 1991 in Lubbock, TX with the permission of Most Rev. Louis Vezelis, OFM and is operated under the auspices of the Franciscan Friars.

In September 1992, the property at the present location was purchased.

From the fall of 1992 until October 2000 the Franciscan Friars came to Lubbock once a month (except for 18 months in the mid-90’s) to offer the Holy Sacrifice of the Mass in the traditional Latin language.

In October 2000, Fr. Bernard Colussy, OFM was sent to Corpus Christi for about two months as a full-time pastor. In late November of the same year, he and Fr. Joseph Noonan, OFM switched positions, Fr. Joseph coming from Our Lady of the Rosary in Milwaukee, WI and Fr. Bernard returning to his former parish. Fr. Joseph has remained as pastor since December 1, 2000.

The parish, beginning in 2015, underwent a modest expansion to accommodate the needs of Sacred Heart Seminary which is now located on the same property. The new building is the current church which doubled in size.

The congregation at Corpus Christi has always been small and for the most part a faithful one. This parish has had to battle the local diocese against the same errors that we face in each region where we are located. The error is that of Modernism which has been externalized through the changes in the Catholic Church since 1958 and was condemned by Popes previous to the Modernist era (1958).

The history of this parish is necessarily intertwined with work of the mission churches operated by the Franciscan Friars. Missions have been established over a period of years in numerous location sin the West and Southwest. Presently (2021), mission are located in Phoenix, AZ; Dallas, TX; and Hallettsville, TX.

It should be noted that nearly all those who attend Corpus Christi have come from local Catholic churches. At different times in the recent past they have come to realize heresies and abuses and the general destructiveness of the changes in the Church.

Biographies of The Clergy 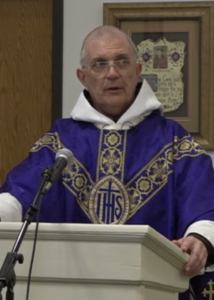 Father Joseph Noonan, OFM is a native of Louisville, Kentucky. He is the seventh of ten children.

He entered St. Bonaventure Seminary in Rochester, New York on August 15, 1981 and was ordained on June 13, 1987 in Milwaukee, Wisconsin by Most Rev. Louis Vezelis, OFM.

He has traveled extensively in the United States, caring for souls who reject Vatican II and the heresy of Modernism. Father was sent to Milwaukee, Wisconsin in 1992 to assist Father Bernard Colussy, OFM in teaching at the school which was attached to Our Lady of the Rosary Catholic Church.

Father Joseph was sent to Lubbock, Texas in December 2000, ministering for the souls in West Texas where he first established Corpus Christi Mission in September 1991. He has continued to travel, caring for souls at different times in Texas, New Mexico, Arizona, California, Louisiana and Alabama. In September 2017, Father began to care for a group of Catholics in the Czech Republic.

In November 2009, Father Joseph began the Catholic Faith Radio Program at the invitation of a parishioner. The program continues at the present time on KRFE AM580 Radio in Lubbock, Texas each Friday from 1:30 – 4:30 p.m., Central Time. It is streamed through the website www.catholichour.org which Father Joseph established around 2010. Sunday Masses began to be streamed through the website beginning also in about 2010.

Father Joseph was named the Director for the Third Order of St. Francis of Assisi on January 2013. He continues in this position at this time (2022), caring for Tertiaries throughout the United States, Mexico and England.

Father Joseph continues to labor for the Church in Lubbock, Texas in the many different apostolates which Divine Providence has seen fit to give to him. 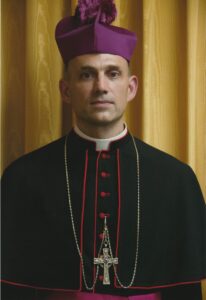 Bishop Giles Butler, OFM is a native of Walton, Kentucky. He is the eighth child in a family of fourteen. He entered the Franciscan Order in September 1984 in Rochester, New York. He was ordained on September 17, 1989 at St. Joseph’s Mission in Union, Kentucky.

Father Giles has traveled regularly from Rochester, NY to Union, KY to care for the spiritual needs of the laity at St. Joseph’s Mission throughout his years as a priest and bishop. Travel has been an essential part of the various apostolates of the Franciscan Community to which he belongs.

He continues to care for the souls of the various churches and chapels throughout the United States, and more recently in Europe. He has made use of the internet by teaching classes online and establishing two websites for the community. One of his favorite apostolates is to teach young children and guide them in the fundamentals of the Catholic Faith.

He took over as editor of The Seraph in 2013 and has elevated the content to a truly inspirational level. The magazine is printed in and distributed from Rochester, New York. 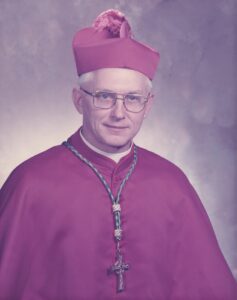 Bishop Louis Vezelis, OFM was a native of Rochester, New York. He entered the Franciscan Order in 1949 with the Lithuanian Franciscan Community in Kennebunkport, Maine. He was ordained to the Holy Priesthood on June 16, 1956 in Montreal, Canada by His Eminence Emile Cardinal Leger.

Father Louis was sent to South Korea in 1956 to help re-establish the Franciscan Order there after the devastation of the Korean War. He spent 18 years in South Korea as a religious, priest, missionary, chaplain to the Armed Forces, and pastor of local churches.

He returned to the United States in 1975 and began to educate himself on the changes in the Church resulting from Vatican II. In 1977, he made the decision to separate himself from his religious community and the Diocese of Rochester, NY. As he said many years ago, he could no longer be a part the Modernist destruction of the Catholic Church.

Father began to say the Latin Mass, turning away from the so-called New Mass and changes of Vatican II. In 1977, he formed a Franciscan Community in Rochester, NY, accepting qualified men who desired to live a traditional religious life according to the Rule of St. Francis.

In September 1980, he started The Seraph, a magazine dedicated to teaching the Deposit of Faith and exposing the errors of the Modernists. The magazine is now in its forty-second year of publication.

On August 24, 1982, he was consecrated a bishop in the Roman Catholic Church according to the Traditional (Old) Rite of the Catholic Church. In the following years he continued to fight against the Modernist heresies and the destructive changes of Vatican II.

He ordained several men to the Holy Priesthood in the years which followed. These priests celebrate only the Latin Mass. This Mass is not the so-called Indult Mass promoted by the Modernists.

In 2005, Bishop Louis Vezelis consecrated Father Giles Butler, OFM to the episcopate, thus assuring the community and laity of having a Catholic bishop for the future.

Infirmities burdened him in the last years of his life. He died on January 1, 2013 in Rochester, New York.

May he rest in peace.